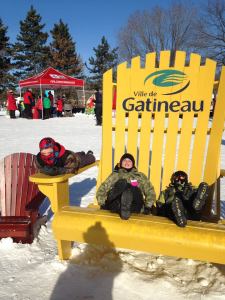 Our family loves Winterlude. From the time our eldest was born almost thirteen years ago, we’ve never missed a year. Our third son Elliot was born in January and attended Winterlude that February, bundled up Canadian-baby style; snug in a warm snowsuit with his back against a sheepskin. He went for his first skate on the canal at four weeks old (don’t worry-we didn’t put skates on his feet until he was two).

Funny little artifact from this pic: that’s an actual camera hanging around my neck. Anyone remember those? Also I still have that toque, and it’s still my favourite. We look rather cold! Plus ça change, plus c’est la même chose. The jacket Mac is wearing in this picture is the one Elliot wore yesterday. With three sons, it pays to be frugal. 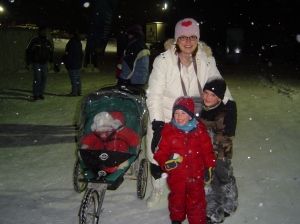 Winterlude is a very important three-weekend festival in Ottawa, an opportunity to entice visitors to come when the weather is not at its most hospitable. Winter festivals are common in northern cities, and are timed to fall mid-way between Christmas and spring, giving everyone’s winter-weary and seasonal-affected souls something to look forward to and a reason to bundle up and get outside.

We usually try to time things so we miss the big crowds, but this year the kid’s schedules meant that early Sunday of opening weekend was our only chance to go. While there was still a lively crowd, the tourists haven’t really started to roll in yet and I think many Ottawans were holding out for temperatures milder than -31 with the wind chill. If you don’t know what wind chill is, you obviously live in a place where you don’t need to know so good for you and don’t bother looking it up. It was a cold and brilliantly sunny winter day. Everyone was warmly dressed and we enjoyed about three hours of outdoor fun before the kids started asking for beaver tails. 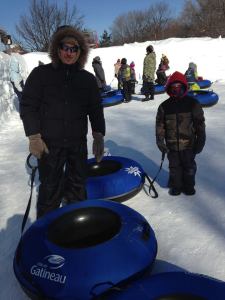 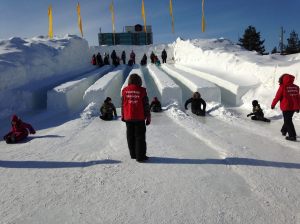 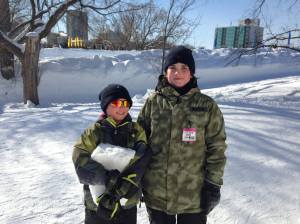 I can always count on my boys to live large in these situations, and they didn’t disappoint. They zip-lined (bigs), skied (youngest), slid down snow hills on tubes, and ice hills on butts (with the whole family). As we were leaving, a busker co-opted Owen into sitting on his shoulders for a unicycle ride, impressing me with his ability to size-up a compact yet apt, older child through many layers of clothing. 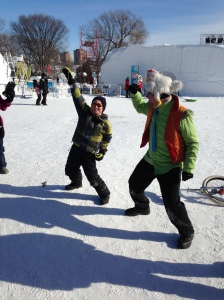 This guy was a great busker. I must have been distracted because I forgot to turn my phone sideways. I did note with some pride though that I got/laughed at my first French joke.

In short, it was a great day. At one point, it was just me and Trevor, standing off to the side while the kids played. Younger families were all around us, wrestling with kid’s mitts and pulling sleds through the snow, many of them exasperated.

I said to Trevor, hey do you notice how easy things have gotten for us? Remember when we used to have to schlepp all that stuff? We didn’t bring anything but ourselves this time. I don’t even think I handed out a Kleenex. In past years, my hands would have been frozen from having my mitts off while I attended to the kids. Except for to take a few videos on my phone, they hadn’t come off at all.

Somehow after years of struggle, we’d landed in the golden zone of parenting. Our kids still like spending time with us, but parenting them has gotten so much easier, in ways that we can only notice by looking back to where we used to be. We even had time to pose for this picture while they were busy playing. A nice volunteer took it for us (she had to take her mitts off, so thanks to her for that). 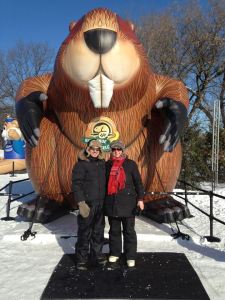 I ran into a friend a few weeks ago. I was wearing a new outfit that I quite liked; cream pants and a cream sweater with a forest green coat. My friend, who has young children, complimented my outfit, and then added wistfully, “wow, can you ever tell you have older kids now. I wouldn’t even attempt that outfit.” The white coat I’m wearing in the first picture was an overly optimistic purchase that almost always had boot marks on the side from carrying the kids. These days, I can wear pretty much what I want and not worry about hand prints and boot smudges.

I enjoyed my kids very much as babies. I was thrilled when a friend handed over her sweet baby boy for some snuggles at the arena this weekend, but I’m not sad that mine are growing up. Overall, I’m pretty content these days. It’s nice to have days like we had on Sunday, all of us having fun together and everyone more or less just managing themselves. And I got to keep my mitts on! If only I could figure out how to lace their skates at the outdoor rink without freezing my hands. I’ve hit level expert on all things winter outdoor fun, but that’s one piece that’s still missing. If anyone else knows please tell me!

Here’s a few more from the way-back machine. That’s my mom, my kid’s wonderful Nana, pulling a small Owen on his sleigh. 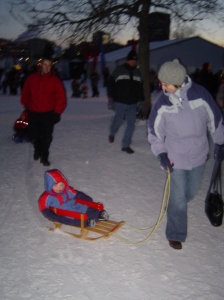 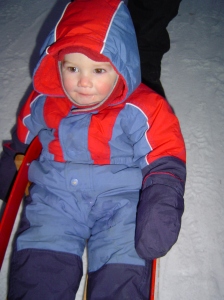 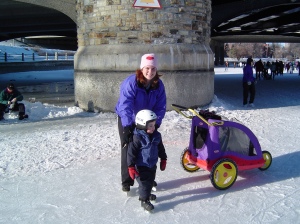 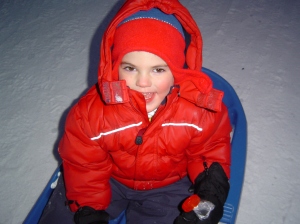 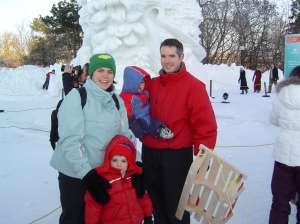 6 thoughts on “On travelling light and keeping my mitts on”